The Socratic dialectic is a time tested method of discovering mistakes in thought. Should modern day choice based games bring this ancient technique into the new age?

“The only true wisdom is in knowing you know nothing.” - Socrates

In my experience, and probably yours too, the brain is riddled with lingering misconceptions about the universe. If I cared to look, overturning and reviewing almost any unexamined idea reveals a mess of misunderstandings. Yet at any given moment, my universe looks right enough to me, I am unaware and unperturbed by these unknown misconceptions.

This presents the possessors of brains, such as you and I, with a problem. How do I discover these errors that I am unaware of, when they are a part of the material with which I think?

Socrates had a method for rooting out mistakes that was so successful, he believed in anamnesis. A psychological theory that was popular in Ancient Greece, in which humans possessed innate knowledge and learning was the act of remembering it. By breaking ideas down to an atomic series of steps, he both contradicted people who believed their misconceptions, and led people to answers they thought beyond them.

This is demonstrated in Plato’s work1, Meno, where in Socrates asks a series of questions to a slave boy, finding the boy was able to deduce geometrical answers he’d not been educated in.

Soc. Attend now to the questions which I ask him, and observe whether he learns of me or only remembers.

Soc. Such a space, then, will be made out of a line greater than this one, and less than that one?

Soc. Very good; I like to hear you say what you think. And now tell me, is not this a line of two feet and that of four?

Soc. Then the line which forms the side of eight feet ought to be more than this line of two feet, and less than the other of four feet?

Soc. Try and see if you can tell me how much it will be.

Boy. That is evident.

Soc. And how much are three times three feet?

Soc. And how much is the double of four?

Soc. Then the figure of eight is not made out of a line of three?

Soc. But from what line?-tell me exactly; and if you would rather not reckon, try and show me the line.

Boy. Indeed, Socrates, I do not know.

Soc. Do you see, Meno, what advances he has made in his power of recollection? He did not know at first, and he does not know now, what is the side of a figure of eight feet: but then he thought that he knew, and answered confidently as if he knew, and had no difficulty; now he has a difficulty, and neither knows nor fancies that he knows.

Now I personally don’t believe the boy was remembering a past life of geometrical tutelage, but this dialogue may hint at an interesting feature of the brain. If we are all able to infer correct answers from simple questions, then perhaps the difference between minds might lie in how frequently we access and use these little facts to construct more complex conclusions. Maybe. It's fun to think about at least.

Socrates dialogues not only taught people of the basic facts, but they also revealed his technique of combining facts together in a series of basic inferences, to reach whole conclusions. He especially enjoyed using confident people’s misconceptions to construct something disjointed and self-contradictory, revealing errors of thought said person could not see themselves.

We can also observe that Socrates dialogues were excellently formatted for choice games. A series of simple questions, pausing the thought process at each atomic juncture of a conclusion, to review the simple set of possible answers the facts can yield. If his methods could be digitized, could we design dialogues that reveal these unknown misconceptions we all have?

Digitizing such dialogues would have several benefits

Whether multiple choice questions are beneficial for education is a debated topic, but they are one of the better researched tools available today. Some criticisms involve “guessing effects and unintentionally exposing students’ to wrong information”2(p1) as well as the difficulty of creating good distractor answers. The validity of distractors was well stated by Haladyna and Downing (1993) where they defined a plausible distractor as one that is able to attract 5% or more of student answers. They found only 8% of multiple choice questions reviews contained valid distractors.2(p2)

Creating good distractors for a Greek dialogue could prove a challenge, especially given 'yes, I agree' is the answer 80% of the time, approximately.

An example of a test making use of multiple choice questions to thoroughly explore ones understanding of a subjects atomic ideas are concept inventories.

One concept inventory for algebra involves questions such as:

By entwining such questions in an overarching dialogue or narrative, sequenced with intent to solve some larger, open ended problem, atomic facts can be exercised along side open solution searching. To illustrate with the above example from Meno, Socrates may have been asking a series of multiplication questions, or questions about which the relative size of line lengths, but they were sequenced to figure out what kind of line length would be capable of giving a square of 8. Multiple skills were exercised with the same questions.

One advantage both Socratic dialogues and digital choice games have over traditional multiple choice questions, is their ability to change course depending on the students answers. If a misconception is detected, then the mistaken person may be lead through additional discussions to explore the misalignment.

Once the ability to couple diagnostic questions and remedial dialogues has been aquired, it then becomes possible to experiment. Varying the characteristics of the dialogues, such as the characters, the priming words, the number of options etc. to observe which combinations yield the best outcomes for different types of people, could give us new insight into exactly how the brain learns from materials. 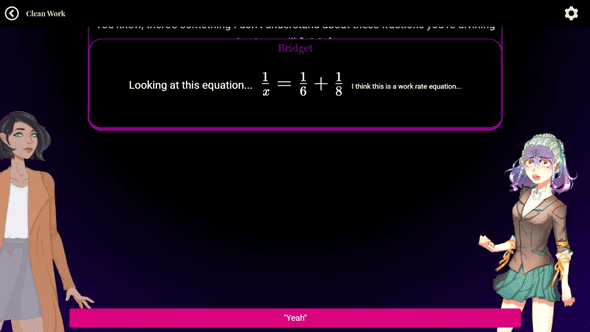 An example of such a dialogue is a game with a working title of 'clean work' I am currently developing. While the story is about work rates and time, It involves a conversation about a counter-intuitive idea in fractions. Players can explain to their confused sister that when a larger number is used in the denominator of a fraction, it results in a smaller fraction value. The confusion your sister has that her faster work rates result in a larger fraction, draws the minds eye to a point of potential confusion. I'll be trying out a variety of dialogue styles to see which get better results, and documenting the results.

Hopefully, this new age technology can pair with ancient techniques in surprising, helpful and enjoyable ways. Whatever the results turn out to be, there is so much room for experimentation today.